A Time On Earth
September 30-October 27, 1989
By Vilhelm Moberg, translated from the Swedish by Roger McKnight & Jay Lutz

A novel that Moberg published in 1963 was adapted to this play in 1966. Moberg wrote extensively about the experiences of immigrants to America, especially those who, like Moberg, had difficulty assimilating into American culture, resulting in unhappiness and disillusionment. The play is set on Laguna Beach, California in 1962 and in Smaland, Sweden from 1911-1949.

The Immigrant: A Hamilton County Album
October 15-November 12, 1989
By Mark Harelik, from a concept from the author & Randal Myler

This play is an exploration of the immigrants who were our ancestors, in an effort to celebrate, sometimes dismiss and hopefully understand them. Only then can we fully understand ourselves.

Time: 1909 through today
Place: the immigrant’s journey begins in the tiny Jewish villages of Russia and ends where our play begins – in Hamilton County, Texas

December Mornings
November 25-December 22, 1989
(in repertory with A Servants’ Christmas)
By Truman Capote, adapted for the stage by Peg Sheldrick

Two stories take place in Alabama and New Orleans in the 1930s. One year separates the events of Act I and Act II.

Act I – “One Christmas” – Buddy visits his father in the French Quarter, stumbles over secrets and demands ransom for his parents’ hearts.

Act II – “A Christmas Memory” – In Alabama, Buddy visits his cousin, whom he sees as the wisest person in the world, even though she’s never left home or even seen a movie. But she knows how to make and fly stupendous kites, cut a perfect Christmas tree and bake and send a fruitcake to the President!

A Servants’ Christmas
December 13-24, 1989 (in repertory with December Mornings)
By John Fenn

This popular play is a musical telling of the life of Nina Clifford, operator of a St. Paul bordello from 1888-1917 on Washington Street, in the Irvine Park area of the city.

A musical about the 1916 miner’s strike of the International Workers of the World (IWW), or “Wobblies,” in Minnesota’s Iron Range. Miners from Southern and Eastern Europe struggle with the challenges of a new life in a new land to dig the riches of “Mesabi Red” ore from Minnesota soil. The time is April through November of 1916; the places include Duluth and the towns and mining locations on the Minnesota Iron Range.

NOTE: The original run of this production was scheduled to close on April 1. The run was extended and closed on April 8. Popular demand for tickets resulted in an additional “separated extension” that ran from May 4-20, 1990. 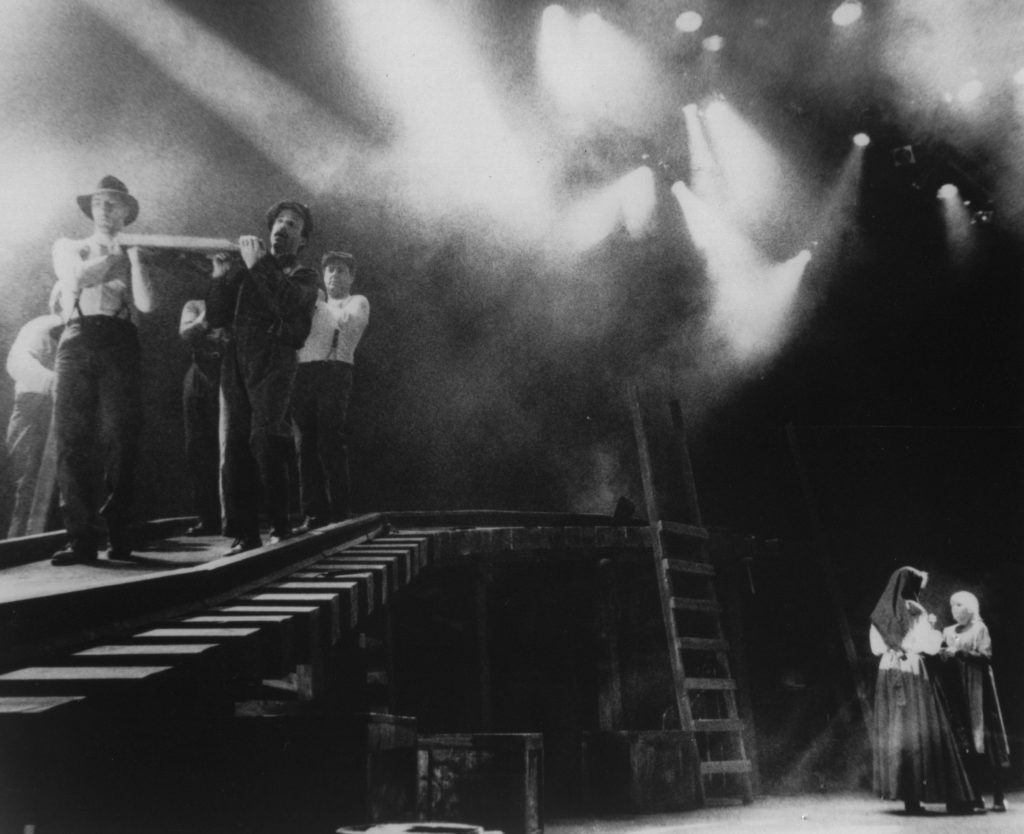 Comment
Lynn Lohr and Lance Belville gave me a crash course in theatre by bringing me on for Mesabi Red. I started at History Theatre the same year on that same production as Ron Peluso. He played the part of “harried Director,” while I wrote songs for the show, sometimes until midnight in an upstairs closet. Lynn and Lance threw me into the deep end and Ron and I formed a friendship that lasts to this day. After Mesabi, it was a few short years until Orphan Train with Patty Lynch and Ron. And again, we ran light on food and sleep, and heavy on imagination and creativity. I equate History Theatre as a guide to how those before us strived to live a better life and one of the highlights of my own life in the performing arts. Congratulations to all on 40 years!

This production consists of four one-act plays about our community, our home. What are the values and issues that bind people together or draw them apart? Who rises above the all-enveloping transactions of “making a living” to make a life? What do we celebrate? For what and for whom do we grieve? What are our icons? We examine these questions and the cultural heritage that enriches us here.

Was Rosemary Clooney in Dark Shadows?
By Grant Richey

Minnesota’s “Dan Patch” was the name of one of the fastest harness-racing horses in history. His owner, Will Savage, created a marketing empire around his horse’s name and image. When Dan Patch died in 1916, the horse was joined in death within hours by his old friend and master, Will Savage. The time of the play is 1906-1916. Scenes occur in the stable area of a racetrack, Dan Patch’s private rail car, the train platform, the Red Mile at Lexington, Kentucky and at the “1:55 Horse Farm” in Savage, Minnesota.

Sister G is the Founder/Executive Director of the Guadalupe Area Project (GAP), an alternative high school where class sizes are small, which allows close teacher supervision and personalized instruction. GAP also offers teenagers another opportunity to change their lives for the better, learn self-assurance and acquire the skills needed for success. The time is the present; the place is a GAP classroom on St. Paul’s West Side.

The play tells the story about the murals Ta-coumba Aiken painted in numerous cities, towns and villages throughout Minnesota. Golden Thunder and the characters in the play are composites of the places where Mr. Aiken has worked and the people he has met along the way.