This play is based on the life of Mary Terpin, a 13-year-old who came to St. Paul in the 1840s to become the wife of successful tradesman Louis Robert, and how she befriended other prominent women of the day, including educator Harriet Bishop and Anna Ramsey, the wife of Minnesota’s first territorial Governor. The play is set in or near St. Paul between 1848 and 1849.

Comment
Since 1999, History Theatre has been my artistic home in the Twin Cities, and Ron Peluso, my great teacher. I owe them both so much. From our first production together, in that smash hit, First Ladies of Ramsey County, in which I played Anna Ramsey and choreographed a few dance segments, I began learning from Ron. And now, almost twenty years later, throughout our collaborations on fifteen other shows, and almost as many remounts, I continue to learn from him. Throughout all of our theatrical adventures, some glorious and others challenging, he’s not only put up with me, but helped make me a better actress, a better choreographer, a better artist, and most importantly, a better person. Ron’s unwavering support and belief in me has been a true blessing in my life and invaluable to my artistic growth and career. Yet I am but one of the countless others…staff, playwrights, designers, directors, technicians, choreographers, musicians, actors and more…who have received these extraordinary gifts of encouragement and support, and who have grown and benefited from the History Theatre’s unique mission. I don’t know of anyone, or of any other theatre, that has had more of an impact in helping artists’ creative visions become a reality. On top of those extraordinary qualities, Ron’s good humor, leadership, and professionalism have created a wonderful working atmosphere and have been a steadfast example that I try to emulate. I am evermore grateful for the opportunities and experiences I’ve had at History Theatre, and to Ron for his presence in my life, and for his professional guidance, endless support, and loyal friendship.

In story and song, this is the tale of children from the slums of New York City who were transported to farm families in Midwestern locations from Texas to Alaska between 1858 and 1929. The play’s events are set in 1889.

A Couple of Blaguards
January, 2000
By Frank and Malachy McCourt

A one-man show written and performed by a Minnesota native American. The author/performer tells stories about his people to help audiences understand the challenges and rewards of native Americans on and off their respective reservations in Minnesota, America and the world.

To Kill a Mockingbird
(in repertory with Rez Road 2000)
February, 2000
Adapted by Christopher Sergel

A stage adaptation of Harper Lee’s world-famous and Pulitzer Prize-winning novel, which takes us back to the mid-1930s, when racism, poverty and ignorance dominated the American landscape. Lawyer Atticus Finch steps up to fight bigotry, intolerance and injustice in a small Alabama town.

The play conveys a story about a sordid and controversial murder that occurred in St. Paul in the 1860s. A woman named Ann Bilansky was convicted of giving her husband arsenic in order to run away with his nephew. Thousands of onlookers gathered at Fourth and Cedar streets to watch her hang. Afterwards, those onlookers fought for pieces of the rope.

The Gangster Musical
April 15-May 14, 2000
By David Hawley
Music & Lyrics by Drew Jansen

A musical about gangster activity in St. Paul between 1932 and 1936, when the city served as a kind of sanctuary for criminals (as long as they behaved themselves inside the city limits). 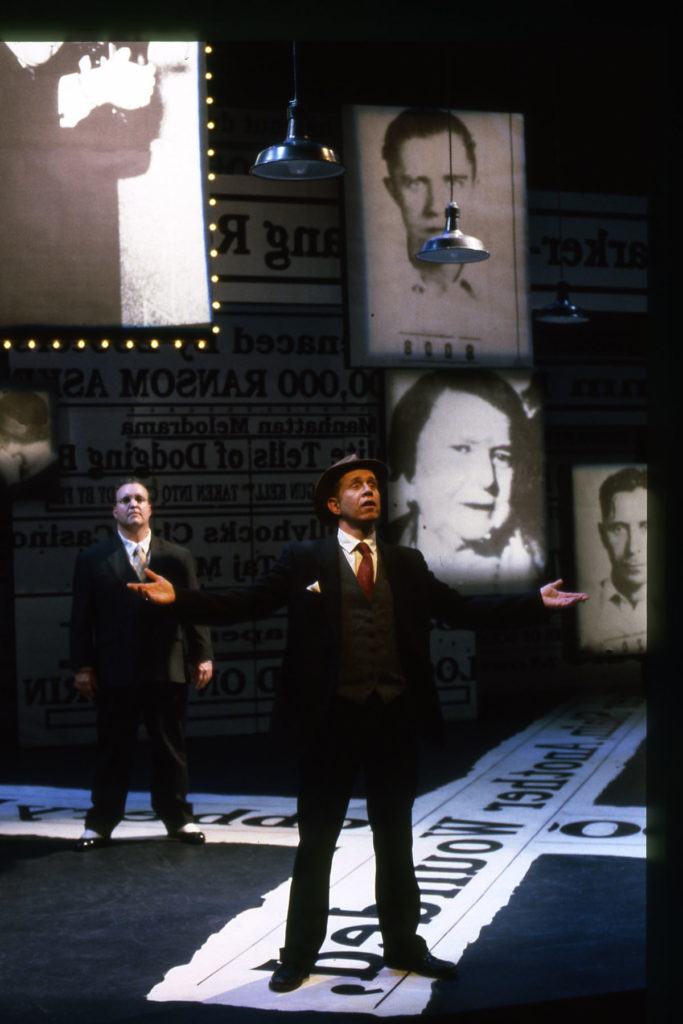