This play, about baseball great Kirby Puckett, asks the audience to consider how we treat our heroes. Puckett’s career was like a classic Greek tragedy. He was an inspirational player who was admired by millions, who later fell from grace among fans before dying unexpectedly.

Hormel Girls (World Premiere)
November 28-December 30, 2007
Based on an idea by Perrin Post
Book and Lyrics by Laurie Flanigan
Music by Hiram Titus

A musical tale set between 1947 and 1953 about Jay C. Hormel’s “Hormel Girls Caravan,” formed after WWII in an effort to promote jobs for returning veterans. The group started as a drum-and-bugle corps, then became a radio orchestra with their own program called Music with the Hormel Girls, all while traveling across America, performing and selling Hormel products. 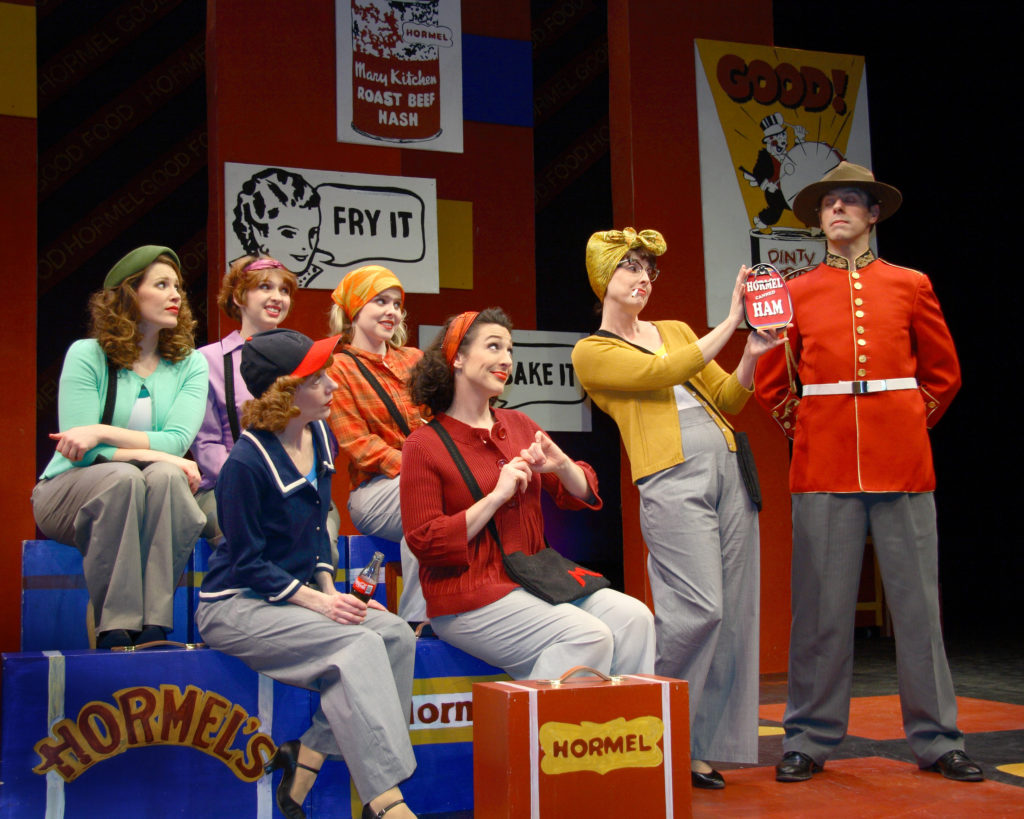 Comment
“Every city in America should have a History Theatre.” – Erin Hart

We call it a “History Theatre moment.” The lights come up, the talkback starts, hands are raised—and there’s one hand that insists on being heard. Time after time after time, that hand is connected to a story, a very real, personal story that relates to the play, or is quite literally related to the play, and (in spite of the fact that it happens with such frequency in the warm, inviting thrust that the History Theatre calls home) it never fails to take one’s breath away.

I’ve heard countless stories of “History Theatre moments,” and have witnessed a few myself. Artistic Director Ron Peluso says the History Theatre “belongs to the people,” and it’s not uncommon that ideas for new works come to the History Theatre from all corners, whether it be a playwright, a documentary, or an audience member who brings a family photo into Ron’s office with a compelling story. Over his tenure, Peluso has commissioned over eighty new plays, the majority of which have continued on to full production – and of the utmost importance to me, the History Theatre has a remarkable track record of commissioning women and writers of color long before our larger community was talking about making intentional decisions around #parity, which stems directly from the History Theatre’s mission and commitment to the community in which the theatre is rooted.

Every single work I’ve seen on the HT stage has had relevance to our present time, and with every passing day, paying attention to our shared history, our lost history, and our ignored history feels ever more urgently important. “Can you imagine,” Ron said to me once, “if every city in the country had a history theatre? If a person could go to the theater and learn about the place they were visiting and the people who lived there? If every community had the opportunity to see themselves on stage, if every voice were welcome at the table, all across the country?”

Asking those questions feels like a call to action. What are the voices in your own community, and are their stories being told? I’m so glad that St. Paul has such a place, and am proud to be a part of the History Theatre community.

Peace Crimes tells the story of “the Minnesota 8” – eight men who were prosecuted in Minnesota for raiding Selective Service draft boards in July of 1970. Three trials were held in the Minnesota federal district courts in Minneapolis and St. Paul. One of the 8 pleaded guilty and received probation. The other 7 received the maximum sentence of 5 years in federal prison. The time and place is 1968 to 1973, moving back and forth between draft board raids, trials, imprisonment, the release of the Minnesota 8 and now.

A one-woman show about nationally syndicated advice columnist Ann Landers, the play naturally centers on questions she receives and answers she provides to the millions of readers who eagerly sought her practical, down-to-earth advice. The action takes place in Chicago on June 30, 1975.

This one-act play occurs in Chicago and Ottawa, Illinois during the 1920s and 30s. It treats the place of mining unions in protecting and defending workers against the ravages of black lung disease, radium and the indifference of powerful mine owners.